Welcome, great EduPodian. Are you searching for Lesson Note for JSS3 Basic Science second term or Scheme of Work for Basic Science JSS3 second term? Search no more! You are in the right place. You will find the lesson note here.

This Lesson Note on Basic Science for JSS3 (second term) covers weekly prepared lesson notes and each of them are rich in classwork, curriculum compliant and syllabus based.

The lesson note is well detailed with adequate evaluation to ensure that the learning objectives are achieved. The scheme of work use in preparing the lesson note is based on the latest unified NERDC/UBE curriculum which is suitable for all schools in all the States in Nigeria. Keep reading, you will find the Link to Download the complete lesson note in Ms-Word Editable format below.

If you want other subjects or another class or term’s lesson notes then click here. We have Secondary School Lesson Notes for ALL SUBJECTS, JSS1 – SS3 (first, second and third term).

Sub-Topic 1: Meaning of Atom; Concept of Electrons, Protons and Neutrons

Matter (solid, liquid or gas) is made up of tiny particles called atoms.

An atom is the smallest particle of matter which can take part in a chemical reaction.

An English Chemist called John Dalton (1766 – 1844) put forward some statements about the atom in1803 and 1808 which are referred to as Dalton’s atomic theory. These helped to explain some observations about the structure and behavior of atoms. However with advancement in science and the contribution of more scientists like J.J Thomson in 1897, Robert Millikan in1909-1916 and Earnest Rutherford in 1911, the theory has been modified. Presently, scientists agree that:

CONCEPT OF ELECTRONS, PROTONS AND NEUTRONS

ELECTRONS: These are tiny particles situated at a comparatively great distance from the centre of the atom. They travel rapidly and continuously in orbits around the nucleus. An electron has a negative charge and a very negligible mass of about 9.1 × 10-28g, this is about 1800 times lighter than the hydrogen atom.

PROTONS: These are tiny, positively charged particles found in the nucleus of an atom. The positive charge is equal in magnitude to the negative charge on the electron. Thus, an atom with the same number of electrons and protons is electrically neutral. The mass of the proton is 1 × 10-24g, which is about 1800 times larger than that of the electron.

NEUTRONS: These are tiny particles found in the nucleus of an atom. They have no electric charge i.e. they are neutral. Neutrons have about the same mass as a proton.

Ernest Rutherford in 1909 proposed a model of the atom. His model showed a small dense, positively charged nucleus surrounded by relatively empty space and electrons continuously orbiting the nucleus at a great distance from it. However in the light of further experimental results, other models of the atom have been proposed. 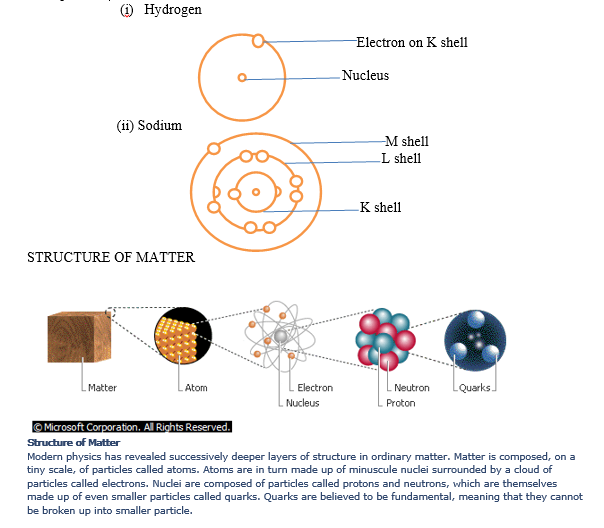 Atoms have several properties that help distinguish one type of atom from another and determine how atoms change under certain conditions. These properties include;

The relationship between the number of neutrons and protons is given by; A=Z – N 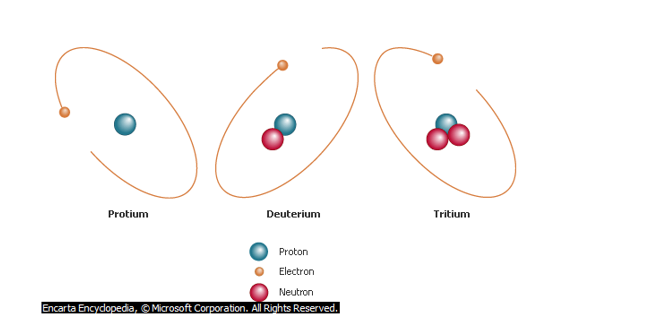 ELEMENT: A substance that is made up of only one type of atoms is called an element. An element cannot be broken down into anything else. Examples are magnesium, copper, zinc, gold, iron, oxygen, carbon, chlorine, etc.

MOLECULE: The smallest unit of a substance which can exist on its own and retain the properties of the substance is called a molecule. A molecule may be made up of one atom only e.g. Argon (Ar) or a combination of atoms e.g. Oxygen (O2).

COMPOUND: A substance formed by the chemical combination of the atoms of different elements is a compound. Examples are Sodium chloride (salt), water, kaolin, carbon (iv), oxide, sand, etc.

MIXTURE: A substance formed when elements or compounds are mixed without any chemical reaction occurring is called a mixture. Examples are crude oil, soil, cup of tea, air, palm oil, solution of salt and water, etc. The components of a mixture can be separated by physical means like evaporation, magnetization, filtration, Sublimation, etc.

PROPERTIES OF ELEMENTS, COMPOUNDS AND MIXTURES

(i)        Some elements have light density e.g. Hydrogen gas while some are heavy e.g.

(ii)     Some elements are colourless e.g. Oxygen, Hydrogen and Nitrogen while some  are

(i)  Some chemicals react chemically with acids to form a new compound e.g. sodium

USES OF SOME ELEMENTS, COMPOUNDS AND MIXTURES

(a) Gold is used in making jewelry and coins. It is also used in art work and dentistry. Radioisotopes of gold are used in biological research and in treatment of cancer.

(b) Iron is used for production of galvanized sheet metal and electromagnets. Iron compounds are used for medicinal purposes in the treatment of anemia and also in tonics.

(a) Kaolin is used in the manufacture of fine porcelain and china ware; pottery, stoneware and bricks; as a filler for pigments and manufacture of       paper.

(b) Salt is used as a seasoning; as preservative for meats; in dyeing and in manufacture of soap and glass. Table salt is combined with small quantities of iodide to prevent occurrence of goiter. Industrially salt is a source of chlorine and sodium. Chlorine is used in manufacture of hydrochloric acid, chloroform and bleaching powder. Sodium is used for sodium carbonate, baking soda and sodium hydroxide.

(a) Crude oil is used as fuel (petrol, kerosene, diesel, gas, etc.) and raw material in the chemical industry. Derivatives are used in manufacture of medicine, fertilizers, plastics, paints, building materials and for generating electricity.

(b) Coal is used as fuel. It is used by electric power plants to produce electricity. Industrially it can be converted to coke and mixed with iron ore and limestone to produce iron. The coal gases given off during the process of coke formation are used to manufacture solvents, fertilizers, medicine, pesticides, etc.

Why should you purchase this lesson note on Basic Science for JSS3 Second Term?