Welcome, great EduPodian. Are you searching for Lesson Note for JSS2 Basic Science first term or Scheme of Work for Basic Science JSS2 first term? Search no more! You are in the right place. You will find the lesson note here.

This Lesson Note on Basic Science for JSS2 (first term) covers weekly prepared lesson notes and each of them are rich in classwork, curriculum compliant and syllabus based.

The lesson note is well detailed with adequate evaluation to ensure that the learning objectives are achieved. The scheme of work use in preparing the lesson note is based on the latest unified NERDC/UBE curriculum which is suitable for all schools in all the States in Nigeria. Keep reading, you will find the Link to Download the complete lesson note in Ms-Word Editable format below.

If you want other subjects or another class or term’s lesson notes then click here. We have Secondary School Lesson Notes for ALL SUBJECTS, JSS1 – SS3 (first, second and third term).

Week 5: MEASUREMENT OF GROWTH AND DEVELOPMENT 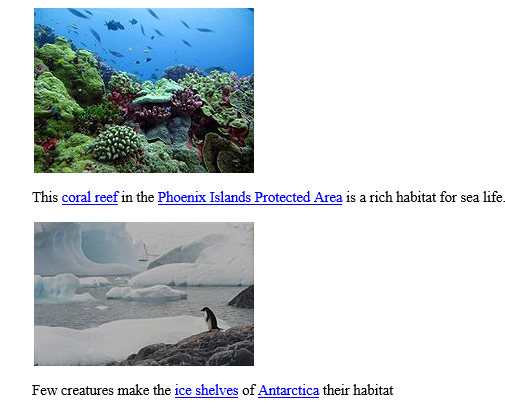 What is an Habitat?

A habitat is an ecological or environmental area that is inhabited by human, a particular species of animal, plant, or other type of organism. A place where a living thing lives is its habitat. It is a place where it can find food, shelter, protection and mates for reproduction. It is the natural environment in which an organism lives, or the physical environment that surrounds a species population.

Living place of plants and animals is called Habitat. Habitat can be big or small example forest or a leaf

Details of Different Types of Habitats

1.Forest Habitat : It is a type of habitat which covers a large area where many trees, plants and animals live.The plants in forests provide shade and protection to many different types of animals

Different types of forest are

Examples of animals living in this habitat are

Deserts  are characterized by dry conditions and a wide temperature range. These are defined as regions that has a less than 254 mm of annual rainfall or precipitation. 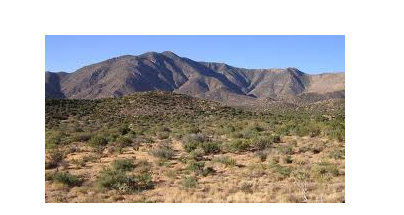 b.Cold Deserts: These are near the Arctic part of world. Cold Deserts have animals like Kangaroo rats, Antelope, Jack Rabbits.

Just as some animals prefer to live on land some need water habitat to survive.

3.Aquatic habitat{Water Habitat}
It refers to the region covered with water where plants and animals survive. Aquatic habitat is further divided into freshwater habitat, marine habitat and coastal habitat. Water is the medium for the organisms living in aquatic habitats.

a)Freshwater habitat:  These are the water bodies filled with fresh water. These include rivers, lakes, ponds, streams etc. Water present has very low concentration of salts. Plants growing in water are called as hydrophytes.

b) Marine habitat: Ocean and seas are termed to be marine habitat. These are full with life. Different varieties of organisms exist in marine habitat. Organisms like, corals, shelled animals, sponges, jelly fish, sharks and many others are found in this habitat.

c) Coastal habitat or estuaries: This is the region represented by the place where land meets the sea. Estuaries are formed when the saltwater mixes with freshwater. These habitats are unique Special type of trees called as mangroves are found in this region. Animals are also well adapted to live in these regions. 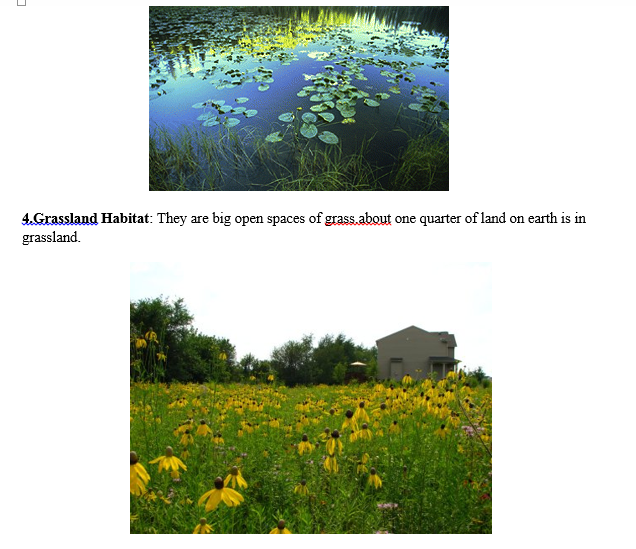 The two different types of grasslands are :

a.Temperature grasslands: They are farther from the equator and have both cold winters and hot summers

b.Tropical grasslands: These are closest to the equator and all hot all the year

Since Grassland lack in trees and heavy bushes Hence grasslands are homes to large herds of the grazing animals such as Bison, Giraffe ,Lion, Zebra, Ostrich

5.Tundra Habitat: The 2 major characteristics of tundra are Arctic tundra, Alpine tundra. These are located at high altitudes on mountains around the world. About one fifth of the earth ‘s land is Tundra. The Arctic tundra is frozen for much of the year. The ground  is permanently frozen 10 feet 3 inches down so the trees cannot grow there. 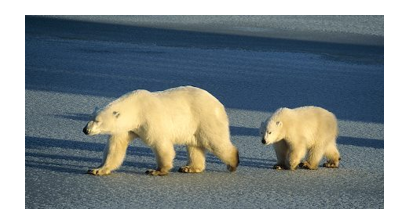 1.What is an Habitat?

3.Give 5 examples of animals found in each of  Habitat.

4. Describe the characteristics of each of this Habitat.

What are Arboreal Animals? Give Examples.

Adaptations are special features that allow a plant or animal to live in a particular place or habitat.

Adaptation of animals in aquatic habitat

Animals which live in aquatic habitat are adapted by structural modification of the structures of their body and also by developing the new structures. Aquatic animals are adapted by modifying the structures present in their bodies which are known as the adaptational structures or adaptational features. The adaptational features of aquatic animals are as follows:
1- Body is stream-lined in shape which helps to minimize water resistance which makes them easy to live in water.
2-Respiratory organs are the gills in perfectly aquatic forms like fishes but in the air breathing forms nostrils are located near the top f the head to enable them t go to surface frequently to inhale air.
3-Locomotary organs are developed as the fins to swim in water easily. There are different types of fins like dorsal fin, ventral fin, caudal fin, pectoral fins and pelvic fins. All the fins help in swimming but the caudal fin helps them to balance the body in water. Sme aquatic forms like amphibians have the thin fold f skin in between the digits f the hind limbs which are called web. Web helps to increase the surface area for swimming. Aquatic animals like turtles have fin like organs called paddles for swimming and whales have the flippers as the swimming organ.
4- Body is covered by scales which make the body soft and slippery so as to escape from the enemies and also helps them to prtect the internal soft organs of the body.
5- Some fishes have got the hydrostatic organ called air bladder for adjusting them in the different  depths of water according to their need by increasing the amount of gas or by decreasing the amount of gas in side the air bladder. 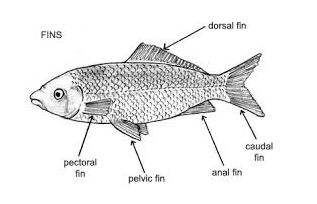 Plants have adaptations to help them survive (live and grow) in different areas. Adaptations are special features that allow a plant or animal to live in a particular place or habitat. These adaptations might make it very difficult for the plant to survive in a different place. This explains why certain plants are found in one area, but not in another. For example, you wouldn’t see a cactus living in the Arctic. Nor would you see lots of really tall trees living in grasslands. 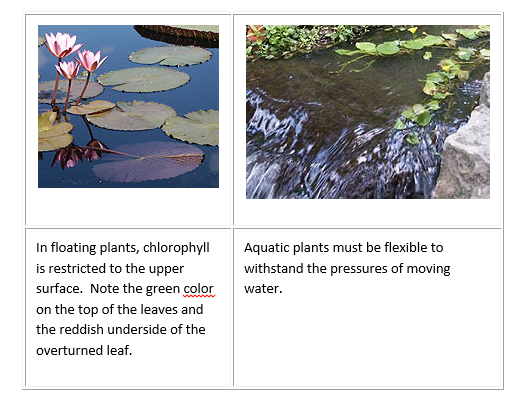 The Desert
The desert is very dry and often hot.  Annual rainfall averages less than 10 inches per year, and that rain often comes all at the same time.  The rest of the year is very dry.  There is a lot of direct sunlight shining on the plants.  The soil is often sandy or rocky and unable to hold much water.  Winds are often strong, and dry out plants.  Plants are exposed to extreme temperatures and drought conditions.  Plants must cope with extensive water loss.

Slower growing requires less energy.  The plants don’t have to make as much food and therefore do not lose as much water.

The Temperate Grasslands
The temperate grasslands, also called prairie, feature hot summers and cold winters.  Rainfall is uncertain and drought is common.  The temperate grasslands usually receive about 10 to 30 inches of precipitation per year.  The soil is extremely rich in organic material due to the fact that the above-ground portions of grasses die off annually, enriching the soil.  The area is well-suited to agriculture, and few original prairies survive today.

Soft stems enable prairie grasses to bend in the wind

All animals adapt to survive in the wild, and frogs are no exception. Here is a list of the top ten physical adaptations that enable frogs to thrive in wetlands. 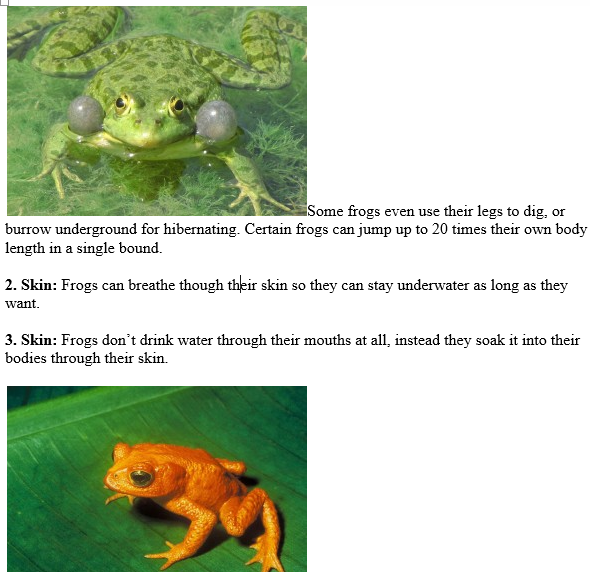 8. Teeth: Frogs do have teeth, but they are small and not good for chewing. Instead, 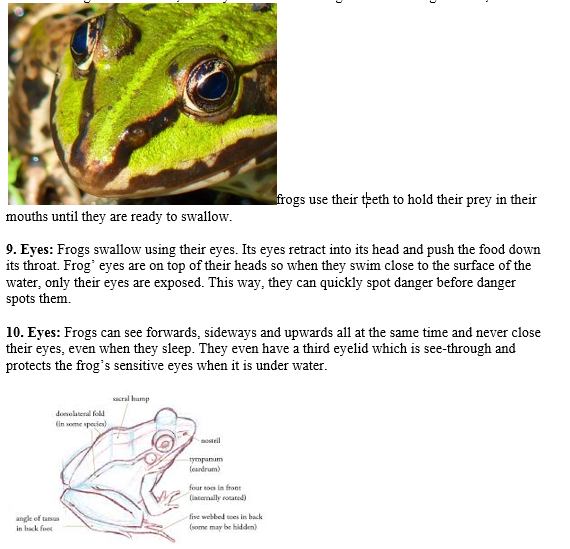 Acclimatisation:
The ability of an organism to make small adjustments or changes in the body in a short period of time to adjust itself to the surrounding atmosphere is called acclimatisation. People who visit mountain ranges suffer from altitude sickness due to poor oxygen content in the atmosphere at such heights. Their body gets adjusted or acclimatised to changes in the surroundings.

Biotic components include all the livings organisms in a habitat, i.e. plants, animals and microorganisms.

Abiotic components include all the non-living things in a habitat, i.e. air, soil, water, sunlight and temperature. The favourable conditions for survival of living organisms are provided by abiotic components.

Why should you purchase this lesson note on Basic Science for JSS2 First Term?